August was another great month for your KiwiSaver accounts with markets staging their strongest August since 1986. Global fund managers are typically at the beach on holiday during August, which leads to a very quiet month – but this new post-pandemic world appears to be changing that paradigm.

Momentum from previous months continued to push markets higher in August with Developed Countries delivering the best August since 1986 rising 6.5%, a particularly astounding result as traditionally August is a quiet month for fund managers in Europe and US. The key drivers of markets were increased confidence a COVID vaccine is creeping closer alongside the US Federal Reserve giving a push to monetary policy by announcing they are comfortable to let inflation run hotter than the traditional 2% which implies interest rates will stay lower for longer.

It is becoming increasingly apparent recovery is a tale of two asymmetric fates - a handful of large COVID winners and many small COVID losers. This is a pattern seen in the US, China and NZ.

Companies that have become more preferred by a stay at home consumers, that enable remote communication or are health-related such as the tech giants Facebook, Alphabet, Apple, Amazon and Microsoft and A2 Milk and Fisher & Paykel Healthcare have responded with soaring performances, lifting their market indexes with them. Then there are the other traditional companies that have yet to return to their previous January highs.

In the US, the market has returned to all-time highs. However, as you can see in the chart below, there are two different courses. An index of technology stocks has delivered a 58% return year to date, whereas the remainder of the S&P500 has a 3.5% loss year to date.  New Zealand is similar; once Fisher & Paykel Healthcare and A2 Milk are removed from the index, the remainder is in loss-making territory for the year.

Technology stocks vs the rest, US S&P500 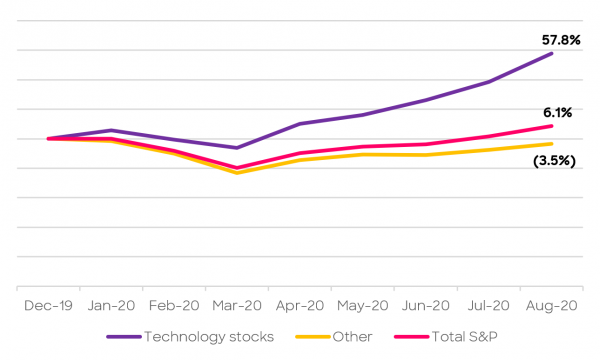 Contrasting the stellar stock market performance economic indicators remain pessimistic, US unemployment and GDP contraction contrast with the record highs seen in the stock market.  Wall Street is at record highs while Mainstreet is learning to live with mass redundancies and long term restrictions on daily lives.

The Federal Reserve’s shift in its policy framework by moving to an “average inflation target”  is significant as Central Banks don’t easily stray away from their mandates. It was leading to an already weaker US Dollar dropping further in value against major currencies, including the NZ Dollar which rose to a high of 0.6751, the highest rate since July 2019.

US equity markets had a slower month rising only 2.2%, less than a third of the US Equity market return and less than half the Rest of the World.  This lower return was driven by ongoing uncertainty around the relationship between Washington and Beijing with President Trump showing signs of using the conflict as a platform for his re-election campaign.

Emerging markets continue to be in the holds of high COVID-19 infection rates. India, the world’s 2nd largest country and 8% of the MSCI EM Index, is struggling with the deepest recorded recession and over 3.54 million reported cases.  Manufacturing indicators for China were less than expected; however, increased domestic demand is running pace to the services sector.

Europe has seen a robust economic rebound with indicators for August showing increased mobility and positive consumer behaviour. However, the resurgence of COVID-19 has slowed the momentum down as case numbers accelerate back toward their April highs in several countries. The relaxing of borders during the summer months has seen a re-emergence of the pandemic, particularly in Spain and France.   Despite this, the European markets had a good month with the Europe Stoxx 600 rising 3.4%.

Japan had a particularly strong month with markets rising by 6.5% driven by increased global confidence and a strong sign of confidence provided by Warren Buffet’s Berkshire Hathaway acquiring a 5% stake in several trading firms. Prime Minister Shinzo Abe’s surprising announcement of his resignation due to health concerns left investors uncertain about the future of “Abenomics” toward the end of the month, and experts warn that the Japanese markets may remain fragile until there is a clear successor.

Two significant events affected the NZ markets in August. The existence of a COVID cluster in Auckland instated a second lighter national lockdown, and a denial of service attack disrupted the NZX for four days. Trading had to be halted which affected the previous record highs of the index. A2’s outstanding performance was dampened, with a 10.8% share price fall primarily due to its reported revenue and profit, which, despite being record-making, was below investor expectations. There is also concern the company might be caught in the cross-hairs of the escalating diplomatic spat between China and Australia.

Globally, August was a month that showed the sensitivity of the share markets to any piece of news, particularly news from the world’s reserve currency country of choice - the US.  As we have said in previous market updates, the market performance over the next few months will depend mainly on the success (or otherwise) of a vaccine and whether investors can continue to see through the very dismal economic data.