July was another mind-boggling month in the markets. Uncertainty continues to grow with COVID-19 gathering pace and reopenings delayed around the globe, yet markets continued their advance.

The prospect of ongoing monetary and fiscal stimulus keeps markets moving higher as investors do not appear to have better options other than continuing their support of global equities. In our opinion, the past month reinforces the old adage – it is time in the markets that counts rather than trying to time the market.

The US markets notched up an impressive 5.5% gain in the month which took the market back into positive territory for the year. The index is now up 2.3% for the year, though there are some very clear winners and losers within this positive performance. On one side we have the COVID winners – these are sectors and stocks that have benefited from people staying at home (IT, Consumer Discretionary and Communication Services) or been involved in the fight against COVID (Healthcare stocks). On the other hand, are the stocks that are more exposed to the general economic climate and more sensitive to people moving around and consumer confidence (Financials, Energy and Industrials) which have underperformed. This group is probably a better reflection of the broader economy. 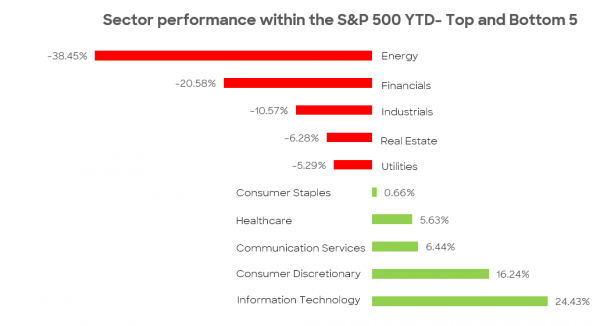 Demonstrating the random nature of markets at the moment, on Friday 31 July, data emerged revealing US GDP had shrunk 33% during Q2 on an annualised basis. This is the worst GDP performance since the end of WWII. Yet the same day, Facebook, Microsoft and Apple announced bumper earnings meaning the market ended positive on the day.

The rest of the developed world had a slightly negative performance with markets shrinking by 1.8% in the month. This was primarily driven by a weaker US Dollar which harmed export-orientated countries and an accelerating second wave of COVID infections slowing down reopening efforts in Japan, Europe and Australia. The two largest regions had negative share markets in the month with Europe down 0.8% and Japan down 2.6%. Australia was slightly positive as a result of growing commodity prices and continued economic growth in China, Australia’s largest export market.

Emerging Markets continued to show improvement with China market growth driven by technology and pharmaceuticals with the SSE Index up 10.9% for the month. China is predicted to become the word’s largest economy later this year as its growing middle class creates large amounts of domestic demand. The rapid recovery can be seen in travel within the country returning to pre-COVID levels while international travel remains limited. However, the market strength is starting to worry some people with the Chinese Government putting out warnings to retail investors to be careful in the “frothy” stock market.

Back here in New Zealand, our little market continues to chug away and goes from strength to strength reflecting our position in the fight against COVID. This month a solid earnings season was heralded by strong performances across several companies who reported better than anticipated performance. Though when looking at the New Zealand market performance it is a segmented story. A2 Milk and FPH have been very strong performers, the overall market is up 2% for the year through, without these two stocks, the market would be down 8%!

Interestingly, the global currency markets are showing some signs of pricing in the current state of the pandemic. There was a rush towards safety in the US Dollar during the freefall in global stock markets in March. Fast forward to July and the US Dollar had one of its worst-performing months since 2010 with a dramatic 5% drop as investors fret about the long term costs of the monetary and fiscal stimulus used to support the economy through this period.

It remains unclear what the remainder of 2020 will be like for the world. The degree of doubt cast from the pandemic makes all models and predictions seem inapplicable from the large daily fluctuations of data. Participants in the markets are grasping at any piece of information that might point them in the right direction. Some have remarked that there is a lot of speculation happening and a myopic focus on growth at the expense of value. Only in hindsight will we be able to see what the full picture will be.

As we have said many times over the past 6 months, we are relieved to be a passive investor and not trying to second guess these very random markets.