Up until 24 March, the market was in free fall, in the space of a week, we had 3 days where US markets were halted because the fall was too far and too fast. This level of volatility reflected the growing severity and uncertainty of the Covid-19 situation.  It quickly became clear that it was far from certain when or how the world would start to come out of this health crisis and the only thing markets understood was that the economic impact would be significant.

To add to the Covid-19 uncertainty, Russia and Saudi Arabia started an oil price war after they were unable to agree on output restrictions to stabilise prices.  This saw oil prices drop below $22 / barrel from almost $70 / barrel pre-Christmas. At these price levels, it is assumed that most of the US oil industry is unprofitable and could need to shut down.

And then everything changed on 24 March, the US Government announced it would pull together a stimulus package to help to struggle US businesses and workers.  Over the following few days, a $2.3 trillion stimulus package was announced (almost 3x larger than the stimulus package offered during the Global Financial Crisis).  Investors took that as a sign that Government's will do whatever it takes to shield consumers and companies from the worst of the economic effects.  Since 24 March, markets rallied 14% and the global stock markets are now only 19% off their peak.

The strong and unprecedented Government action was also helped by good news out of China - they have managed to keep the infections under control despite restarting their economy and manufacturing activity appear to be picking up.  China is a few months ahead of the world in this crisis so is a precedent that everyone is looking at.

The two charts below really demonstrate to us how volatile the markets have been over the past month.  The red columns on the daily movements chart reflect days where trading was halted for 15 minutes as the markets had fallen by over 7% during the day. 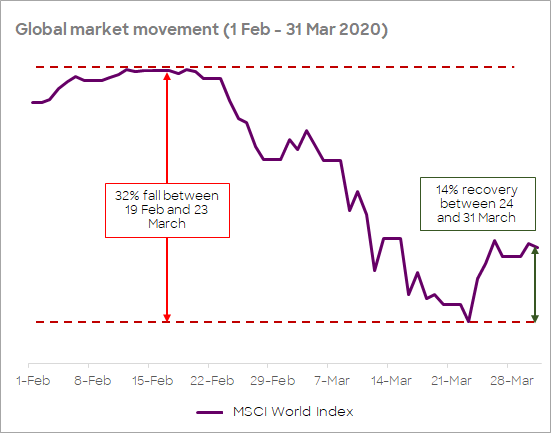 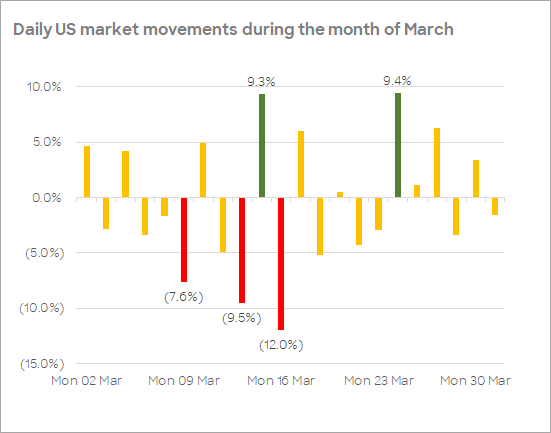 New Zealand businesses that operate in travel and tourism will probably experience the hardest hit due to borders being closed.  Potentially our core agricultural commodities may come through relatively unscathed (people still need to eat) though this will depend on the speed with which the Chinese economy can recover.  The fact that the New Zealand market has performed broadly in line with global markets indicates that investors believe New Zealand's recovery will be no different from other markets.

We don’t have a crystal ball, so therefore we can’t tell you whether markets have recovered and we are now in a sustained recovery, or whether the current rally is simply about of short-lived optimism. All we know is that things are moving extremely quickly. The only answer is to be patient.