Joe Biden’s stimulus and accelerating vaccine rollout drove markets to new records in March. Every day, markets seem to be reaching new heights that were deemed unthinkable 12 or 24 months ago.

Amazingly, markets have just completed one of the greatest 12-month periods of all time, with global markets up over 50%.

The past 12 months have been one of the wildest periods ever seen in the markets. Markets fell almost 30% in the space of 3 weeks in March 2020 as Coronavirus pushed the global economy into a standstill; oil prices went negative, interest rates fell below 1% across all maturities for the first time ever, and the US Stock Exchange stopped trading 3 times in the space of 10 days to halt markets in freefall. One well-known fund manager asked the question “Can the market actually go to zero?”

Looking back, it was a truly amazing time, personally, I was glued to Bloomberg TV every day as the commentators looked aghast at what could happen.

The first signs of Coronavirus appeared in December 2019, at that point it appeared that it would be contained in China and would be unlikely to impact the broader global economy. In mid-February it became evident that this would become a global problem, global infections soared, and international borders started to close.

By early March it was clear that the only way to stop the virus would be to shut down economies, and so we were introduced to the concept of a lockdown. Markets panicked at the idea of locking down economies and feared the worst - how would companies survive if consumers were locked in their homes and could not spend any money. This fear saw one of the most rapid market declines in history, with the market falling 30% over the course of 3 weeks and the US market halting trading 3 times as it breached the 7% fall limit.

Luckily, policymakers had learnt their lessons from the 2008 Global Financial Crisis and acted extremely quickly. Interest rates were quickly slashed to zero around the world and Governments enacted massive stimulus packages to help companies survive. To put this in context, the $2trillion stimulus bill signed in April 2020 was more than double the stimulus package signed in 2009 to help the US recover from the Global Financial Crisis. This initial stimulus package has been followed up with two other packages totalling a staggering US$5.8trillion.

Aside from policy support, progress on vaccines has been truly amazing. It was widely expected that a vaccine would take up to 24 months to prepare, yet vaccines were delivered in November 2020, significantly ahead of most people’s wildest expectations.

The combination of vaccines and massive policy support appears to have worked, with economists consistently revising up their estimates on how the global economy would perform. Economic assumptions on how far the global economy would fall and how quickly it would recover have been found to be widely pessimistic and are consistently being upgraded. The US is now forecast to grow at almost 6%, one of the fastest growth rates in the post-war era and recent IMF forecasts have the US economy finishing 2022 at a higher level than was expected pre covid.

With a roaring economy, the final string to investors bows has been the record low-interest rates that are now expected to be a permanent fixture. Short term interest rates are expected to stay close to zero into the intermediate future, meaning investors don’t have many other options as to where to put their money.

As you can see from the charts below, it has been a truly golden period for equity markets. A combination of strong economic growth and record low-interest rates has driven the market to record highs. 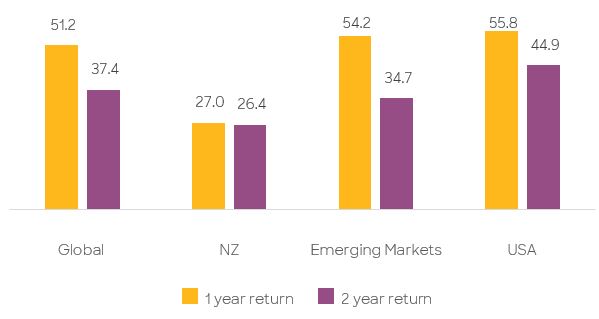 The MSCI global index is up 51% over the past 12 months which is a truly astonishing result, the only time world markets have performed higher was in June 1983, back then the market was driven by recovery out of the 1982 global recession and success in tackling inflation led to a significant fall in interest rates.

The market recovery is not only a function of the Covid crash, on a 2-year basis, markets are up 37% indicating the performance is about much more than just Covid.

Globally, the regions that have done the best are the US and Emerging Markets. The US because of their significant stimulus, technology orientated economy, and their vaccine program. The emerging markets (remember from a markets perspective emerging markets mean China, Korea, Taiwan) dealt with Covid better than many of the western markets.

The New Zealand market has performed poorly over the past 3 months and has not performed as strongly as others on a two year basis. Whilst the New Zealand economy is doing extremely well, the New Zealand markets have been hurt by some structural issues. One of our largest companies A2 Milk (which made over 13% of the market at one point) has fallen over 40% during this period and we have very few companies leveraged to a technology-driven Covid recovery (Fisher Paykel Healthcare and Pushpay being the only two). In addition, the very strong New Zealand dollar has resulted in international investors pulling money out of New Zealand hurting some of our larger companies in the past few months. 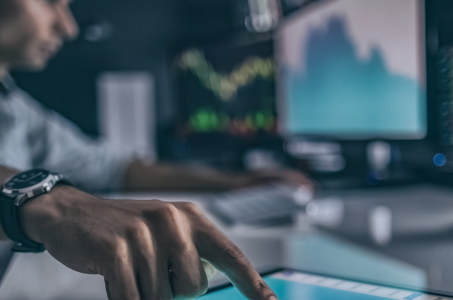