Markets traded in a tight range in May, potentially signaling a halt to the ongoing push upwards we have seen since March last year.   The global economy is growing at its fastest rate since the 1960's, and markets are trying to decide whether the economy is overheating which might lead to inflation and an end to the free money era, or whether we're just in a transitory period.

May was a relatively muted month in the markets, however, the key trends from the past few months continued. Globally economies continue to perform well with vaccines being rolled out at breakneck speeds, employment is picking up, consumers are spending up large, and manufacturing confidence is at all-time highs. This is all reflected in a global economic growth forecast for 2021 of over 6%, the highest rate since the end of World War 2.

All this good news could lead to an economy overheating (demand exceeding supply), which could ultimately result in future growth constraints and higher prices for consumers. Commodity prices are surging, consumer goods are sold out and global manufacturing is hamstrung by sky-high shipping rates (due to insufficient supply) and shortages in micro-chips. All these factors could lead to inflation (higher prices), which may require central banks to raise interest rates and stop the supply of free money which has been such an important driver of market returns since Covid.

All of the above reasons meant that markets remained relatively muted in the month, with daily and weekly returns driven by those who are winning the above arguments. Markets are now driven by economics, so this is more of an economic update.

For the first time in a while, the US market only hit a single new record high in the month (we have recently been seeing multiple records broken each week), and US investors have turned their focus to politics and what’s happening in Washington.

President Biden laid out his infrastructure spending wish list, which would be paid for with higher taxes. At the same time, Treasury Secretary Janet Yellen (previously a chair of the US Federal Reserve) commented that inflation may emerge in the economy, and she would expect the federal reserve to react if it did (i.e. raise interest rates).

US inflation hit its highest level since 1992, with prices rising 3.1% in May versus the previous year. The key question for the Federal Reserve and investors is whether this is transitory (a short-term impact driven by people emerging from lockdowns flush with cash) or permanent. If permanent, then the Federal Reserve is likely to raise interest rates.

On the economic side, data continues to improve, with most factors beating estimates:

And anecdotally we’re seeing several other things happening in the economy that are demonstrating bottlenecks:

Overall, the US economy is roaring hot and this will drive earnings growth, the key question in the markets is whether this earnings growth will be enough to offset higher interest rates. The federal reserve still believes they are a long way away from “full employment” which is the key determinant of when they will look to raise interest rates – leaving the question of ‘what will happen with inflation and interest rates?’ unanswered.

However, the tides might be turning as Europe was one of the top-performing regions in the month, with Eurostox growing 2.7% pushing the Rest of the World Category up 2.9% in the month. Growth forecasts are rising as a result of accelerating covid vaccinations and ongoing monetary stimulus.

In the UK the PMI (purchasing managers indices) hit a fresh peak and business confidence reached a new record. Factory output is growing at the fastest rate since December 2018 and the UK economy appears to be rebounding from the double hit of Covid and Brexit. Though interestingly, the UK market materially lags behind the US and rest of Europe with a 20% return over the past 12 months compared to 30% return for Europe and 40% return for the US.

Emerging markets had a mixed month, the Chinese market has now fallen by almost 20% since its February high as investors fret about the regulatory crackdown on the larger tech companies and continued changes to the economic structure which have been proposed. The poor performance in China is offset by the continued strength of the Taiwanese and Korean markets which have been some of the best-performing markets in the world over the past 12 months. Their strong markets have been driven by their success in dealing with Covid plus their exposure to the high tech industries and chip manufacturing.

The S&P/NZX 50 fell 3% in the month – the market only closed in positive territory for 5 days in the whole month of May. The issue of rising interest rates and some large companies underperforming hit our interest rate-sensitive market.  Fisher and Paykel Healthcare were again one of the key weaknesses.  The stock dropped 17% over the month after announcing near-term uncertainty in earnings as the boost in hospital equipment sales driven by Covid fades.

The RBNZ said that they believe they will need to start raising interest rates by the third quarter of next year to curb inflation. This announcement pushed the Kiwi dollar higher and created further headwinds for our dividend-orientated market.  While the central bank's intention to raise interest rates reflects confidence in the local economy, it creates a disturbance in the rate-sensitive share market here in NZ. The New Zealand market has one of the higher dividend yields in the world, and therefore any rises in interest rates will impact the relative value of those dividend yields versus bank deposits and interest rates. 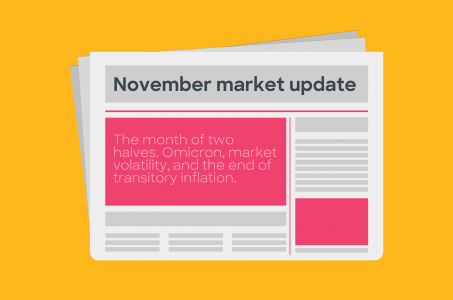 Omicron wipes any gains the markets made in the first half of November, economies get to grips with inflation no longer being 'transitory', and investors brace for more volatility.

The re-emergence of Covid-19 in New Zealand can lead to many scary thoughts. Back in March, we saw markets fall by c.