November - a month of two halves

Omicron wipes any gains the markets made in the first half of November, economies get to grips with inflation no longer being 'transitory', and investors brace for more volatility.

Everything was rosy and the market continued to focus on the good news until Friday 26th when news surfaced from the WHO that a new Covid variant (Omicron) had been discovered in South Africa. Global markets fell 3.1% over the following week, wiping out any gains that had been hard won prior to this.

In the first 24 days of the month, global markets rose 1.7%, further extending the very impressive 5.5% gain seen in October off the back of strong economic data showing an economy in full recovery driving strong corporate earnings.

Markets hate uncertainty and the old mantra of “sell first and think later” was definitely on display after the Omicron news emerged.

The kōura funds are impacted by currency (translation of local currency indices to NZD) and also differences in constituents between the underlying indices and the actual investments that the kōura funds invest in.

Omicron and what it means for markets

The Omicron news hit on Friday 26th November, the day after Thanksgiving in the US. On the day, markets fell 2.5% in the US and European markets fell up to 4%. Over the few remaining days in the month, markets bounced between negative and positive depending on the flow of news, at times it felt as though the markets were behaving like a tennis ball at the Australian Open.

This was a strong reaction, particularly given there was very little detail around the true impact of the variant and also the limited scope of companies that may be impacted by further lockdowns or greater restrictions. In all reality, greater restrictions are likely to impact travel and hospitality, both of which are very small parts of the overall share markets. Though a significant outbreak and new restrictions are likely to delay the economic recovery.

There were a few reasons for the market reaction:

Overall, it's impossible to say what the medium-term impact of Omicron means for markets. In our view, the core fundamentals have not really changed much in the past few months. We are still sitting with record low-interest rates, a hazy path to unwinding those low-interest rates, and a very strong economic recovery which should drive strong corporate earnings.

Omicron (and future new variants) will probably lead to higher volatility over the next few weeks until we get more certainty on its impact, but at this stage, it's unclear why Omicron will change any of the medium-term market fundamentals. And let’s remember, markets value the medium to long term, not the short term!

An update on economic data

Economics are always a key driver of markets and over the last few months we have been giving you an overdose on economic data – but it's critical to the market trends that we're seeing at the moment.

The two key metrics that markets are looking at currently are Jobs and Inflation data – both of which are the key inputs used by the Federal Reserve as to what happens with the Fed Funds rate (the US equivalent of New Zealand’s Official Cash Rate). The US Federal Reserve has a dual mandate, they need to target inflation at 2% and also seek full employment (though no one is sure what full employment actually means). Any changes to the Fed Funds rate means a change in interest rates which will have a massive flow-on effect through the entire financial system.

Global inflation is expected to peak in 2021 at 3.7%, significantly higher than the long-run average of 1-2% that has been seen over the past 15 years. Economies all over the world are clearly running hot and suffering from worker shortages, supply chain issues, and accelerated consumer spending. The word ‘transitory’, 2021’s favourite word, has disappeared from the lexicon and economists now acknowledge that inflation is likely to be more of a medium term rather than transitory nature.

All of this has meant that Central Banks have started to ease stimulus and set out plans for returning to a more normal interest rate environment (again, we're not sure what that means anymore).

New Zealand’s Central Bank was one of the first in the world to start lifting interest rates, with the Official Cash Rate increasing in October followed by a second increase in November and further increases expected over the next 12–18 months.

In early November the Federal Reserve announced it would start reducing the level at which it is purchasing bonds from late November. Central banks purchase bonds to push down interest rates as they become the buyer of last resort. This is a signal they are hoping that interest rates will start to rise. The Fed Funds rate is expected to start lifting from mid-2022.

Before we dive into the details of how each region performed this month, we thought it would be worth having a visual representation of how the markets reacted once the Omicron news hit. 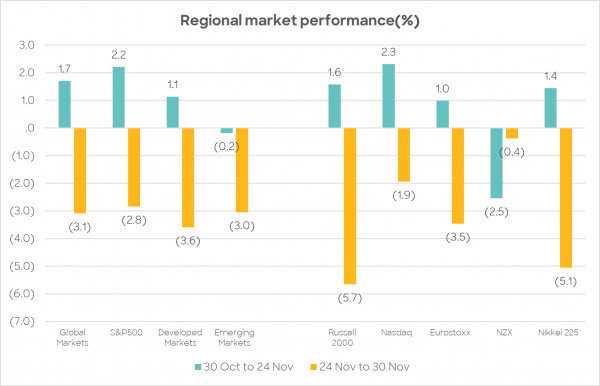 The US market ended relatively well at 0.69% down for the month. The first three weeks of the month saw strong returns with markets up 2.2% off the back of strong economic data and corporate earnings. Before the fall, markets had been up almost 9.5% since the start of October, (note the chart above is showing performance since the start of November).

Following the Omicron announcement, the Russell 2000 (the index of smaller companies) was heavily impacted falling almost 6%. We like to say that the Russell 2000 index represents “Mainstreet”, the more traditional, slightly smaller companies that rely on normal economic cycles versus the large-cap, S&P500 which is dominated by larger and increasingly technology-orientated companies.

European markets fared worse than their US counterparts with the Eurostoxx ending the month 2.5% down. The Omicron news hit particularly hard with the market falling 3.5% in the final week. Prior to Omicron, European countries were already considering imposing restrictions. Vaccination rates have not reached the highs that had initially been hoped for and vaccines are starting to wear off with booster programs only just getting underway.

Unlike their US counterparts, European countries are likely to take drastic action to halt the ongoing spread of the virus, and that potential is reflected in the sharper market reactions.

The Japanese market was impacted more than any other market. Japan is very much an export-dependent country. Earlier in the month GDP decline had been stronger than forecast (-3.0% vs an expectation of -0.8%) as a result of supply chain issues and the perception of a softening global consumer environment. Omicron has the potential to further disrupt supply chains which could exacerbate some of the negative growth drivers that were already being felt in the economy.

The New Zealand market continued its dismal run falling 2.9% in the month, taking the 12-month return to a loss of 0.4%, this compares with the US market which is up 28% over the same period. The New Zealand market was driven by interest rates this month, with the prospect of higher interest rates driving the view that property prices may level out impacting the retirement and property sectors.

Travel and leisure-related stocks were impacted by both the Omicron news and news of the delayed border reopening plan. Investors were disappointed at the slow pace of the reopening as it effectively rules out the peak summer tourism season.

Finally, a short word on exchange rates. The NZD ended the month at a 16 month low against the USD. This was driven by two factors:

Uncertainty is all around us at the moment. Though it has been with us for the past 12 months and markets have continued to go from strength to strength, it seems as though we will continue to see volatility over the next few months as investors continue to get to grips with interest rates, inflation, and the ongoing recovery from Covid.

Trying to time the market is notoriously difficult, particularly in these unprecedented times. All you can do is make sure you're properly prepared for the inevitable downturn when it comes. You do that by setting yourself up with appropriate risk and a well-diversified portfolio.

This was a longer-than-normal market update, so thank you for staying the course and getting this far. Though it is a fascinating time with lots happening. 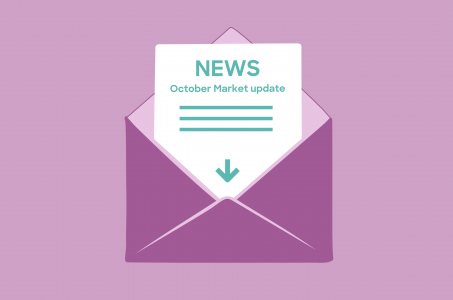 October – Getting back off the mat After a punishing September (global markets fell 3.

The re-emergence of Covid-19 in New Zealand can lead to many scary thoughts. Back in March, we saw markets fall by c.