The best of times, yet the worst of times – financial markets in May 2020

THE BEST OF TIMES, YET THE WORST OF TIMES – FINANCIAL MARKETS IN MAY 2020

Looking at the markets today, compared to what we’re seeing on the news, may make everything feel like the upside-down world.

Markets have continued to rally off the back of easing lockdowns and ongoing fiscal support, a strong sense of recovery has emerged in the financial markets. Though on the flip side, the economic situation continues to worsen and we are starting to see the impact on individuals with millions of job losses. In the US alone, we have seen almost 40million people file for jobless claims in the three months since Covid-19 appeared.

Global markets are rapidly closing in on their previous highs. 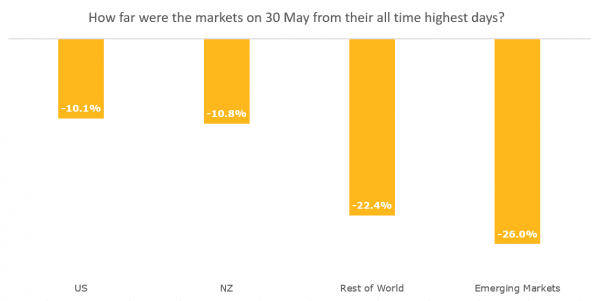 Many may be surprised to see that the US and New Zealand markets are sitting only 10% short of their all-time highs. To understand the apparent mismatch between markets vs the situation we’re seeing on the news, it’s important to understand that these markets have had some very strong performers which have distorted the overall benchmark (Tech in the US; Fisher Paykel Healthcare and A2 Milk in New Zealand). The strong market performance is indicative of investor confidence that the economies can quickly bounce back from the approaching economic downturn, as well as the strength of the Governmental stimulus packages.

Rest of World (largely Europe, Australia and Japan) has been held back by nervousness in Europe around how heavily indebted countries will be able to afford stimulus to rejuvenate the economies.  The European Union has proposed an unprecedented  €750 billion “Recovery Fund” though this is meagre when compared with the size of the US stimulus.

Whilst the strong share market performance may be questionable given the very bleak economic outlook, a number of investors are pointing out that shares still trade at a significant premium to fixed income. The yields earned on US equities are currently 4.9% higher than those earned on US treasury bonds, this compares to a 20 year average premium of 3.2%.  It is becoming increasingly clear that interest rates will remain at (or below) zero for an extended period of time, so investors do not have many alternatives but to move to riskier assets (eg. equities).

To counter the market positivity, tensions in the US are at a fever pitch. With an election coming up, the US administration is looking for a scapegoat and China is increasingly entering its sights as an easy country to blame for Coronavirus.  In retaliation for the escalating rhetoric out of Washington, China has already halted the import of some agricultural products in response.

The widespread protests taking place across the US provide a disquieting political backdrop.  These protests reflect a sense of frustration at a system that has left many African Americans subjugated by systemic issues in its justice and economic institutions. These deep-rooted problems have been very publicly exposed, not just by the protests, but by the disproportionately negative impacts COVID-19 has had on African Americans.

Markets will undoubtedly take a hit from the ongoing protests as well as a potential second wave of the virus that might come from them, which would have the potential to devastate the US.

It remains an interesting time in markets which will continue to be at the whim of the uncertain times we’re living in. There’s a feeling of optimism in the markets, generally, which appear to be jumping on any good news they can find, but we would be remiss to try and predict what might happen next.