What’s been causing all of the recent market volatility, what that means for your KiwiSaver, and the factors in play that could influence the markets in the coming months.

It has been a truly interesting couple of months in the markets, where experts, analysts and media outlets have all swung between wildly different market predictions. In December everyone was predicting a roaring start to 2022. Come the end of December people were preparing for a market crash. January had a rocky start with most global markets dropping by at least 10%. And, fast forward to today, the markets have rebounded and economic data is suggesting we might be through the worst of it (for now).

Our favourite quote of the month came from a media outlet whose description of the market is extremely apt at the moment and perfectly describes the current volatility:

“The stock market is ultimately determined by people trying to predict the future. They’re a superstitious lot, and easily spooked.“

Unfortunately for the kōura KiwiSaver members this resulted in a painful month with markets and KiwiSaver funds showing their sharpest drop for a while.

A closer look at the market volatility over December and January 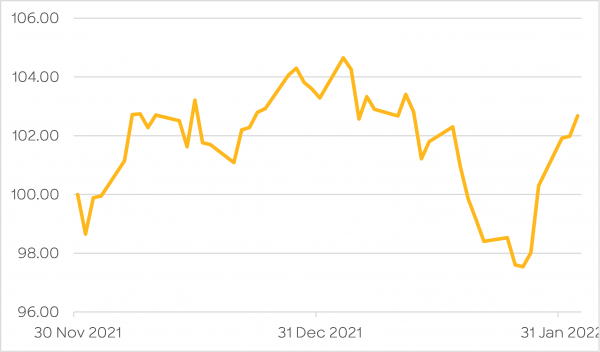 The chart above shows the value of $100 dollars invested in the markets on 30 November 2021. Despite a few ups and downs, by the end of December things were looking pretty rosy with the markets up almost 5%. Though by late January that $105 had dropped all the way back to under $98 and has subsequently recovered.

It has been a truly wild ride recently, with the market oscillating between a few different overarching factors:

2022 is looking to be another stellar year of growth with the world’s economies with real GDP growth of 4.4% expected in 2022, resulting in one of the highest sustained periods since the end of WW2. Strong economic growth will typically result in full employment and wage growth which should drive consumer spending and therefore company revenues and earnings. Interestingly, apart from the ‘87 crash, there has never been a market fall of greater than 20% in the US without a recession to accompany it. The Nasdaq (a selection of high growth tech companies in the US fell c.18% during January and the S&P500 fell almost 15%, so not quite but almost testing this important threshold.

Companies are reporting extremely strong earnings, with over 80% of companies that have reported earnings so far this year beating estimates by an average of 5% (Facebook being the only massive exception). So as much as everyone likes to compare the present period to the tech bubble of 2000, the majority of companies are delivering great earnings numbers and have extremely robust balance sheets which will allow them to weather any storms.

A turning point in the market cycle was Apple’s results announcement on 27 January which was significantly better than expected.

More speculative companies with weak balance sheets (predominantly in the tech space) have fallen up to 50% over the past 12 months as investors have focused on companies that are likely to continue to deliver through a downturn. So, potentially the tech crash has already happened - The Arkk Innovation fund and Bitcoin are great proxies for this.

In late December US inflation numbers were reported at 7%, significantly higher than expected. Inflation is a sign that the economy is overheating and the only way to control inflation is to slow the economy. This is typically done by lifting interest rates which makes debt more expensive and encourages consumers and companies to spend less as funding that spending (through your mortgage or corporate debt package) costs more than it once did. Money is the petrol that fuels the economy and when interest rates rise that is the equivalent of reducing the fuel intake into the economy.

The high inflation number means that the US Federal Reserve will now need to raise interest rates faster than previously expected, resulting in a quick and sudden end to the free money supply that everyone has been using to fund the growth in asset prices.

Saber rattling in Ukraine has added to an already tense investor situation. The fallout from war is likely to be significant jumps in energy prices and potentially a sharp retraction in European growth if Russia decided to stop sending gas to Europe. Russia makes up over 25% of European energy supplies, so any halt in deliveries will have a massive impact on both consumers and companies.

Luckily, it looks increasingly likely that the troop build-up is a simple case of Putin flexing his muscles, if an attack was going to happen it would have happened long ago. Strategically it makes no sense to wait until the US and its European allies have spent a month arming the Ukrainian army before attacking.

Omicron looks as though it could bring the end to Covid and be the variant that moves it from pandemic to endemic. To be fair, all of the good news has already been priced into the market, but the goldilocks scenario does seem to be playing out with Omicron leading to minimal disruptions. The UK and other countries are very quickly reversing any restrictions put in place as a result of the threat posed by the variant, even NZ looks as though it might finally admit it needs to live with Covid!

The jury is still very much out in terms of whether supply chains are recovering or still causing massive disruptions. In recent results announcements, Apple and GM have both talked very positively about their ability to deliver products in 2022 given what they are currently seeing in their supply chains.

Where does this leave us?

To be honest we have no idea what is next.

What is clear is that it’s a very busy news cycle that is keeping investors on their toes. The busy news cycle is on top of the harsh reality that we are currently in one of the longest bull market runs in history and valuations do remain elevated.

Investors are a skittish breed and that is unlikely to change, it is easy to see 2022 continuing. We started 2022 with a broad consensus that 2022 was going to be a great year for equity markets, though investors are no longer so sure.

The market cycle does appear to have shortened, so don’t be surprised if there are more sharp and quick corrections in the coming months. Just remember not to panic and let your emotions take over. Sometimes it’s easier to simply not look, if you are a long-term investor you will see through the volatility, and if you are a short-term investor times like this are a good reminder of why you should not have massive exposure to the share market.